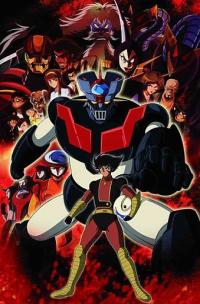 Developed from Japanium ore is the super energy, Photon Power. Seeking this energy is Dr. Hell, a madman craving world domination who along with his subordinates Baron Ashura and Count Brocken, commands the Machine Beasts excavated from Bardos Island (believed to be Rhodes) to attack the Photon Power Lab and take it for himself. Meeting the attack head on is our hero, the hot-blooded teenager Kouji Kabuto who pilots the super robot Mazinger Z, constructed by his grandfather Juzo and made from the strongest metal Chogokin Z. But in this battle between Dr. Hell and the Kabuto family, many legends surrounding the Mycenaean Civilization and Bardos Island, as well as the secrets of Mazinger Z remain shrouded in mystery.