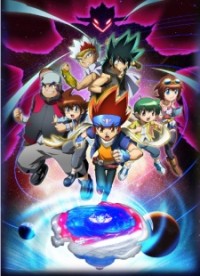 In the Cosmos, an unusual event has occurred.

Taking a break from their latest triumph over Faust and the Spiral Core, Ginga and Co find themselves saving a boy named Yuki from a mysterious youth named Johannes. Although Yuki is a boy genius and an astronomer, he is a Blader who owns “Anubius”.

Ginga and his friends must fight again, just as soon as they get the hang of their new 4D system beys!