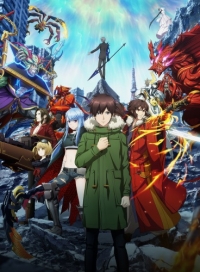 Thirteen years ago, a part of Tokyo broke off and started floating in the sky. The floating part of the city became "Old Tokyo", while the rest that remained on the ground became "New Tokyo". Communication and interaction between Old Tokyo and New Tokyo became impossible. Years after the incident, a young girl discovers that Old Tokyo will soon fall back to the ground. She sets off on a dangerous journey to New Tokyo to save the citizens from impending doom.

When unidentified beings appear, a mysterious blue-haired girl named Sora saves a young man named Kanata. Together with the vampire siblings Toya and Yuna & the monsters Ryoma, Kamu, and Hanzo, they fight for the fate of the world.

Features a new story and characters, unrelated to the first Monster Strike movie and net anime.