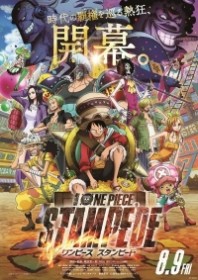 The 14th One Piece movie, in commemoration of One Piece's 20th anniversary, takes place during the Pirate Festival Expo, “made by pirates, for pirates,” where pirates all over the world, including some of its most infamous ones, join in for a big treasure hunt to find a lost treasure, this time of none other than one which belonged to Gol D. Roger!