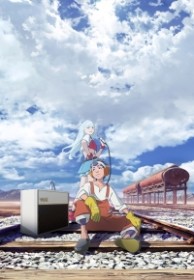 The "great adolescent symphony" is set in a world where nothing called "music" exists. Humans are scared of mysterious lifeforms known as Miminashi (literally, no ears), and the only people who can stand up to the Miminashi are "Prayers" (literally, those who pray in offering) who can Plug In and pilot "Equipment" combat mecha.

Echo, a boy living in a scrapheap town of Liverchester, witnessed the legendary Prayer Jimi in the great battle of Fes against the Miminashi a decade ago. Ever since then, he has held Prayers in great esteem.

One day, Echo is excavating in a scrapheap as usual when he comes across Myuu, a girl with no memories and an empty audio input jack on her waist. She is also a Prayer. Before long, the two embark on a journey to uncover her origins and Jimi, the enigmatic pivotal figure of Fes.

When Myuu is plugged into an amp, something that will change the world is set in motion …. "Thus begins a journey of sound that will never be forgotten."