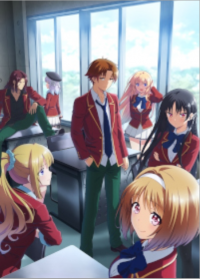 2. Staffel von Classroom of the Elite.

“Classroom of the Elite” enters its second round and continues the story of Kiyotaka Ayanokouji, Suzune Horikita and the rest of the students of Advanced Nurturing High School! Even after D Class has successfully passed the special exam on the deserted island and managed to get some class points, there is not much time to relax on the luxury liner Speranza because the next special exam is already coming up!

This time, it will take place within four days and in eight groups, which have been named after the planets in the solar system. Each of the groups consists of students from all classes – A, B, C and D. However, unlike the previous exam, the assessment is done by group instead of class. One member from each group is declared a “VIP” by the administrators. Then, twice a day, discussions within the group take place in order to find out who is the VIP … or not. The students have to decide for themselves if they want to expose the VIP and weigh up the pros and cons of doing so. Because, depending on the outcome of the exam, one receives private points or class points. Which class will benefit the most at the end of this exam?